WHERE IS YOUR TREASURE? 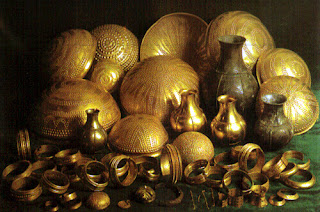 We have just witnessed the wealthy young man decline the offer to sell his belongings and follow Christ along with His disciples. This fellow walked away disheartened. Having noted the profound effect on His disciples, Christ then turned His attention to them.
This account is recorded in the synoptic books of Matthew, Mark and Luke. Let us continue the episode in the narrative of Mark 10:23-27.

"And Jesus looked round about, and saith unto his disciples, How hardly shall they that have riches enter into the kingdom of God! And the disciples were astonished at his words. But Jesus answereth again, and saith unto them,

And they were astonished out of measure, saying among themselves, Who then can be saved? And Jesus looking upon them saith, With men it is impossible, but …
Read more 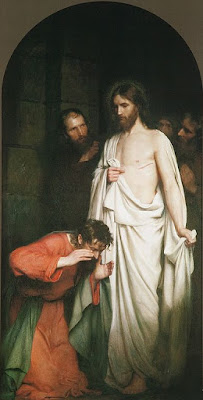 The divine events after the crucifixion and resurrection of Christ is recorded in all of the gospels.  It is John the Evangelist who brings us a more intimate glimpse of the disciples' emotions when their Master appears to them individually and collectively.

John tells us that it was evening on this particular day, the first of the week, in the place where the disciples were.  The doors were firmly shut.  Remember, they had been scattered about when Christ was arrested.  They were meeting probably at an unknown house near Jerusalem, behind locked doors.  They were in fear of the Jews.

Suddenly, Jesus stood in their midst. He appeared before the disciples in the room and said to them, "Peace be unto  you."  When He said this, He showed them His hands and His side.

Once more He said, "Peace be with you!"  He reminded them that as the Father sent Him, He also sends them. Then, He breathed on them.  "Receive the Holy Spirit."

Thomas, one of the disciples…
Read more

WORTH OF A SOLDIER 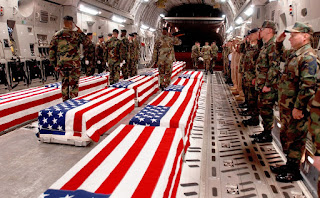 Soldiers' lives differ in value, and so do their deaths. In this disparity lies an important reason why the United States has botched this war in Iraq. Those were the first words I had ever read by Bacevich in a Washington Post op-ed, 2006.

Andrew Bacevich, a professional military man, attended West Point, a PhD from Princeton, served for 20 years in the U.S. Army, and Professor of History and International Relations, Boston University.

I’ve since read his contributions to the Weekly Standard and National Review, and I just finished his latest book The New American Militarism: How Americans Are Seduced by War.

He has an interesting political viewpoint regarding the war, and the military, which at first glance seem to be in conflict; but after reading his book, I understood how Americans have placed our trust in our country’s military power, just on the say of its generals. President Eisenhower, former 5 star General in the U.S. Army, warned the country about the development of  “the…
Read more 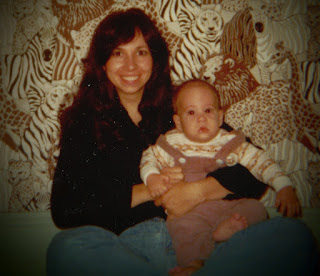 The older women likewise, that they may teach the young women to be sober, to love their husbands, to love their children...that the Word of God be not blasphemed-
Titus 2:3-5.

What associations with all that is lovely are connected with that blissful word mother! To that sound the tenderest emotions of the human heart, whether in the bosom of the savage or the sage, wake up. The beauty of that term is seen and its power felt alike by the prince and the peasant, the rustic and the philosopher. It is one of the words which infant lips are first taught to lisp, and the charm of which the infant heart first feels. It is a note to the music of which it is difficult to say whose soul most responsively vibrates, that of the parent or the child.

Humanity, however semi-brutalized by oppression, ignorance, or even vice, has rarely been sunk so low as to have the last spark of maternal love extinguished or the last sensibility of this kind crushed out of it. This strength of woman’s love for he…
Read more

And Jesus Said To Her 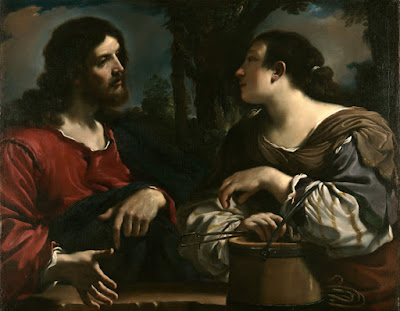 Let us remember when we were captive to our sinful nature! At that time, we had no idea of the One who intimately knows our hearts, convicts us of corruption, and breaks the bondage of our sinfulness.

No words describe how awe struck we feel, how grateful we are for His mercy! He pulled us out of the quagmire of filth from death to life. By His grace, we are His!

When we realized we were cleansed with His righteousness, what did we do? Did we keep this incredulous miracle to ourselves? No! We shared His forgiveness and mercy to anyone who would listen!  Here now is Christ on his way to Galilee from Judea. He and His disciples must pass through Samaria. He is fatigued, and rests at the well, instructing His disciples to go on their way.   We see a woman of Samaria who comes to the water well. The Jewish people were adversaries of the Samaritans, thus her question to the Lord why, being a Jew, would he come to Samaria. This was not a chance rendezvous. The Lord knew this woman…
Read more

WHO THEN CAN BE SAVED? 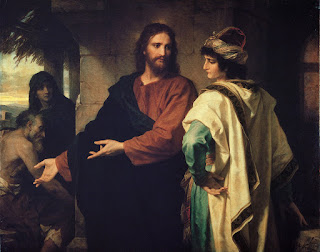 Here is a young wealthy man, who is listening to the One they call Master and Teacher talking to His followers about the Kingdom of Heaven.  He understands this Kingdom is that of eternal life.  The young man approaches the Teacher.  Falling at His feet, he asks, "Good Master, what should I do in order to obtain eternal life?"

The Master responds to this young man affectionately.
"Why do you call me good?   No one is good, no one except God, God alone."

Christ continues, "The commandments...so you are familiar with them: Do not kill, do not commit adultery, do not steal, do not give false testimony, honor your mother and father, and love your neighbor as yourself."

"But I've kept all of those ever since I was a young boy.  What else is there for me to do?"

The Teacher tells the young man what remains to be done.

"If you wish to be perfect, sell all of your possessions, give to the poor, and by doing this you will have treasure in Heaven;…
Read more 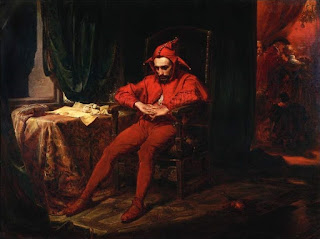 Then He said unto them: 'O fools, and slow of heart to believe all that the prophets have spoken.' Luke 24:25

Those words were spoken by Christ on the day of His resurrection: spoken not to worldlings but to Christians. That which occasioned them was this. The disciples to whom He was speaking were lopsided in their theology: they believed a certain part of God’s truth and they refused to believe another part of the truth that did not suit them; they believed some Scriptures but they did not believe all that the prophets had spoken, and the reason they did not was because they were unable to harmonize the two different parts of God’s truth. They were like some people today: when it comes to their theology; they walk by reason and by logic rather than by faith.  I suppose some of us have wondered how it was possible for these disciples, these followers of Christ, who had been privileged to be with Him during His public ministry …
Read more

The Heart for Missions 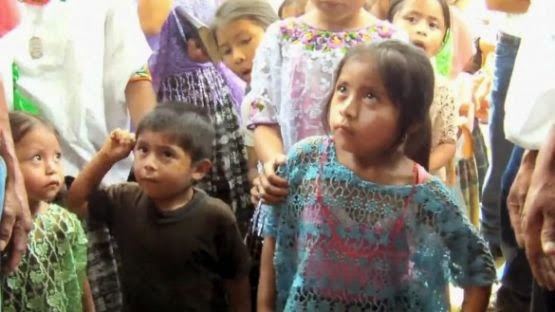 This is a story about a woman I had known very many years ago.  Maria was at our home bible study and shared her plans for retirement from a lifelong vocation as a Spanish teacher.  She announced that she was selling her house, and most of her beautiful furnishings.  She was moving "far away".

We were happy for her; she deserved a great change in her life after her decades of teaching. She sat there quietly, hands folded, and her eyes closed.  We waited as she remained peaceful and resolute. Then in her very soft voice, she spoke:

"I am going to Guatemala."

We were all concerned. Guatemala was a very dangerous place at that time. The civil war had ended, but over a million people were killed, hundreds of thousands were left homeless. She was determined to teach the children English and Christ.  When I went to bed that night, I thought why hasn't the Lord used me in an essential important ministry? What good am I?  I realize now, decades later, continuing to gro…
Read more 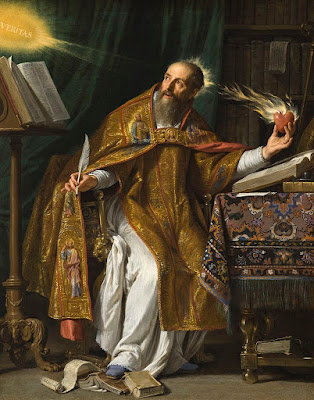 
From City of God:

"For to this earthly city belong the enemies against whom I have to defend the city of God.  Many of them, indeed, being reclaimed from their ungodly error, have become sufficiently creditable citizens of this city; but many are so inflamed with hatre…
Read more 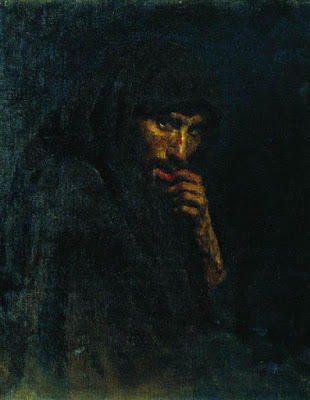 It was apparently on Wednesday morning, perhaps when Christ and His disciples were awakening at their location where He had chosen to retreat, for it was apparent He was facing His death; He had warned them very abruptly about it, "Ye know that after two days is the feast of the passover, and the Son of man is betrayed to be crucified."

His disciples hardly conceived of the reality of their Master's death; but the horror of a crucifixion could not, in their minds, be measured.

The Passover was drawing near.   The chief priests and scribes were plotting how to capture Christ and kill him, but not on the day of the Feast, for fear that there would be an uprising of His followers. ( Matthew 26:2-5 )

Then one of the twelve, who was called Judas Iscariot, went unto the chief priests, and said, What are ye willing to give me, and I will deliver him unto you?
And they weighed unto him thirty pieces of silver.  And from that time he sought opportunity to deliver him unto them.…
Read more
More posts

Angelina Lenahan
“You have heard that it was said, Love your neighbor and hate your enemy. But I tell you, love your enemies and pray for those who persecute you, so that you may be sons of your Father in heaven. For He causes His sun to rise on the evil and the good, and sends rain on the righteous and the unrighteous." Jesus Christ

Forgiving by Angelina Lenahan is licensed under a Creative Commons Attribution-NoDerivatives 4.0 International License.