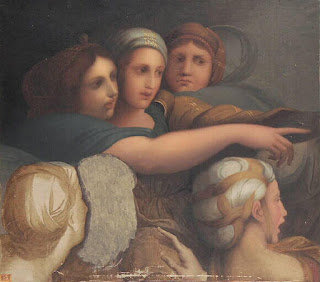 Besides that, they learn to be idlers, going about from house to house, and not only idlers, but also gossips and busybodies, saying what they should not.  1 Tim 5:13
With regard to women in the church, young and old, widowed or unmarried, there are many women believers who genuinely study His Word, listen attentively to our pastors, and do not partake in gossip.

It is this writer's observation that some women pay little to no attention to the teaching and preaching, but instead cluster together in small groups, whispering, texting, and giggling like teenagers. They have no interest in growing in the knowledge and grace of our Lord.  And to Paul's point, there are women who, in the guise of charitable works, flit from home to home, gathering news for talk in the pews.
_______
"Not only does he prescribe to Timothy the course which he ought to follow, but the women also must be carefully taught not to be stained with such vices. It is the duty of the pastor not only to oppose the wicked practices or ambition of those who act an unreasonable part, but to guard against every danger, as far as lies in his power, by instruction and constant warnings.
Now there is nothing that ought to be more diligently learned in God’s school than the study of a holy and upright life.
It grieved him that the levity of those women was a reproach to the godly, and that their lustfulness was reproved, or, at least, was liable to reproof. This led them to proceed to greater and greater degrees of licentiousness, till they renounced Christianity. That amplification is exceedingly appropriate; for is there anything more absurd than that they should, through a wish to promote the advantage of persons, open the door to the denial of Christ?
Nothing is more becoming in women than keeping the house; But there are many who are diseased with the opposite vice. Nothing delights them more than the liberty of running from one place to another, and especially when, being freed from the burden of a family, they have nothing to do at home.
Under the pretense of the respect due to the public character which they sustained, they had more easy access to many persons. This opportunity, obtained through the kindness of the Church, they abused for purposes of “idleness;” and next, as usually happens, from slothfulness sprung curiosity, which is also the mother of talkativeness. Most true is the saying of Horace: “Shun an inquisitive person, for he is always a tattler.”
“No trust should be placed,” as Plutarch says, “in inquisitive persons, for, as soon as they have heard anything, they are never at rest till they have blabbed it out.”
This is especially the case with women, who, by nature, are prone to talkativeness, and cannot keep a secret. With good reason, therefore, has Paul joined together these three things: sloth, inquisitiveness, and tattling."
Calvin

Angelina Lenahan
"But I tell you, love your enemies and pray for those who persecute you, so that you may be sons of your Father in heaven. For He causes His sun to rise on the evil and the good, and sends rain on the righteous and the unrighteous." Jesus Christ