I profoundly miss John, as we were very close for over 25 years, a true brother in Christ. Toward the last few weeks, he said he just has to make it to the finish line, perseverance, after having run the good race.

John reminded me often that his ALS was a light and momentary affliction. He was the most courageous man I knew.

He suffered immensely during his last few hours. No respirator this time, and no trip to the ER - the hospitals refused. They knew he was on his way out. He was in respiratory distress, double pneumonia, all final stages of his ALS.
The night before he passed, he called and told me to record the conversation. He instructed me about his financial affairs, and other things he needed to say. He could barely speak, but he was calm, resolute. He told me not to tell his brother until "it was all over".  And it was, at 7:27, the next morning,

In a different time, I would have been there for John. They would have called me. But.

But God. I was spared witnessing the horrific end of another man dying before his time, my time, but not God's time. 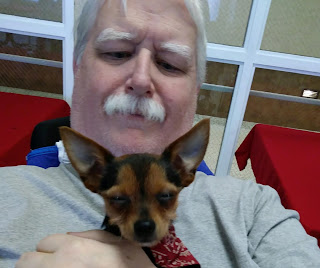 Angelina Lenahan
"But I tell you, love your enemies and pray for those who persecute you, so that you may be sons of your Father in heaven. For He causes His sun to rise on the evil and the good, and sends rain on the righteous and the unrighteous." Jesus Christ